I wrote the story below this preamble in 1999, just as the Bank of Scotland decided it would be a good idea to get into bed with a preacher cum politician called Pat Robertson.
I was flown to the USA first class, at his and the bank’s expense, and stayed in a hotel owned by him. A religiously dry hotel, with not so much as a cigarette machine, and a staff steadily puffing outside the back cargo doors.
There were also some exceptional exceptions in the drink department.
The Bank of Scotland deal fell through after the story below appeared and frankly should never have been considered.
His name, however, just keeps cropping up.
To this day he is a heavyweight Republican donor, campaigner and bankroller. He still speaks daily to 55 million souls through his Christian broadcasting network.
I joined that audience one day, live, in the studio, and watched as the news of the day, the news that tens of millions of voters would be watching, was broadcast. A straight reading of the news was followed by a cut to the man himself, sitting in his silvery haired aura, telling the viewers what they should think about the news just delivered. This happened after every segment.
Everything seemed to be a vengeance from God. It was served up by the harbingers of the USAF.
In the last 24 hours he has been advising Republican candidates on how to win power. So I thought I would post a timely reminder, a warning and a new story for some, all at the same time.

This is the copy from 1999, after a visit to his ranch, in Norfolk, Virginia.

Even before our small, twin-prop plane touched down in Norfolk, Virginia, we knew this town was different.

In the seat in front, a young man, no older than some of the naval rookies being put through their paces on the ground below, sat quietly reading the Holy Scripture.

And as we walked through this East Coast city’s tidy terminal building, there he was in all his glory… 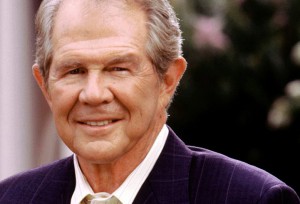 Dr Pat Robertson, smiling down from a huge billboard, proclaiming that the Christian Broadcast Network could change your life.

Pat, of course, is the TV evangelist who joined forces with yet another greater power just weeks ago – only this time, not the Almighty.

His business link-up with the Bank of Scotland caused an outcry, not least from the gay and feminist movements.

Pat Robertson, a dad of four and grandfather to 14, is an evangelist- cum-businessman-cum-philanthropist.

PAT says he loves gays, but he hates what they do.

He also loves women who stay at home and believes they should be given the same incentives to do so as women who go out to work.

And he plans to help set up a telephone bank in the US with the Bank of Scotland.

Contracts are signed and all that is needed is clearance from the governing bodies.

But in the row over the deal, accounts were closed and pickets besieged the Bank’s Edinburgh HQ.

Pat claims Scots ancestry and says he can back it up on paper. But he didn’t have the papers to hand when we met.

He told me the story of his roots was handed down through generations by word of mouth. So if Pat got it wrong, blame his ancestors.

He claims to speak, through his , to 55 million people – that’s the equivalent of almost the entire population of the UK. He also controls the most powerful right- wing lobby party in the States and once ran for president.

He lost and for that we can all say Hallelujah and praise to the Lord.

In the 60s, he packed his wife and kids into the car after telling her he’d received a calling from God. When wife Adelia, known as Dede, asked him where they were going, he replied: “I don’t know, but I’ll know when I get there.”

A short time later, he was on the doorstep of a rundown TV station in Norfolk, telling the stressed-out owner that God had told him to offer a pittance for it.

The owner accepted, and the rest is history.

Robertson now controls a personal fortune of millions and his business interests are on a global scale. The reaction to his decision to front the bank’s push into America seems to have genuinely stunned him. He cannot believe that he is relatively unknown in Scotland.

HERE is a man whose office walls are lined with photos of his meetings with former presidents Bush and Reagan.

Pride of place in a glass cabinet by his desk are two boxing gloves, one signed by Evander Holyfield and the other by George Foreman. But it seems Robertson wasn’t ring-ready when it came to the biggest fight he’s had to face so far – the reaction of the Scottish people to his plans.

A well-polished man in expensive but discreet suits, he says he makes money simply to give it away. He cites Zaire as an example and says his aid convoys reached the stricken African country before any other agencies could mobilise in 1994.

But what he didn’t mention was that two pilots who flew his relief into the country claim the cargo they carried was of little use to the hungry.

They say it was diamond mining equipment. But then maybe the great philanthropist was intent on giving the diamonds to the people…

We met in the dining room of his hotel, within the 700-acre estate of the Christian Broadcast Network.

Chandeliers litter the place and a framed oil painting of the great man hangs over a roaring fire by reception.

A Baptist conference was being held in one of the suites nearby and the place was teeming with black delegates.

Robertson’s Press relations people took great delight in pointing them out to reinforce the fact that he’s not a racist.

Lunch was a sober affair – literally. His hotel has a no- alcohol policy and the good doctor seemed quite happy with his iced tea.

He told me he loved Scotland, has visited often and plays golf at Gleneagles. His handicap is 23, but at the moment his handicap seems to be the Scottish Press and the people’s reaction to his new business venture.

To those who closed their accounts, Robertson said: “I don’t think the Bank is too concerned. Profits are up.”

And he added: “I have been terribly mischaracterised and I think that people have acted on the basis of erroneous information. I don’t know what else to say.

“Prior to this little incident, I was very proud of my Scottish history.”

Robertson’s PR advisers had been stressing that under no circumstances would he use his viewers on the Christian Broadcast Network to promote his new business venture. But when we spoke, he said: “I think maybe in the future we will use the CBN to sell the phone bank.”

THOSE keen on taking up his offer can look forward to Robertson’s face on Bank of Scotland cheque cards and cheque books.

On Zaire he said: “I lost dollars 3million. The plan was to kick-start their economy with the minerals. But the country wasn’t equipped for it.”

And if the Bank of Scotland deal soars sky high, he has firm plans on what he’ll do with his share: “My aim is global evangelisation.

“Obviously, I need funds for my own personal use – I’m not going to give it all away. But I would reinvest it.

“The government lets you give away 50 per cent of your income to charity. Last year I gave away more money than I made. I really did.”

As he stepped into his shiny black Corvette outside the main doors of his hotel, it was obvious who makes the rules.

He had parked right in front of a massive no-parking sign.

Robertson, like Holyfield and Foreman, is a fighter and will never duck a punch.

But it’s perfectly clear that he prefers to hand them out.